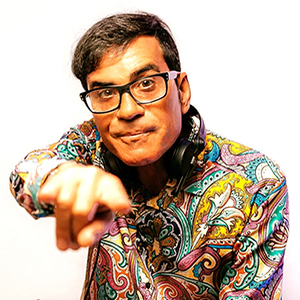 Born in Italy as Giuseppe Nuzzo, Dj Pippi started singing at the age of 7, he already knew he had something to do with music. In the early 70s he was the lead singer in his little band and played in many concerts at school, but unfortunately he couldn’t sing…

As a teenager, he  moved at 16 years old, following his parents in Dusseldorf where he started doing what he really liked with the music and fashion world. In 1979, after a friend told him he should really go to Ibiza with his vibe, he went at Pacha and was really freaked out, both about the atmosphere and the place hoping that one day he would get to play in there. His dream came true in 1984 while he was doing a lot of activities like running fashion and music shops in Germany, when one frizzing day he saw the owner of Pacha in the shop entrance. He said: ‘Hola’, and he goes straight to the point: ‘We need you now in Pacha.’

Can you imagine? I had so much things going on! But my wish to play in Ibiza was stronger than everything! It took me just a few minutes to take the most important decision of my life… I said: ‘yes! I’m ready!’

I took all my records collection and left the country 3 days later to start playing at Pacha, and every day was awesome! His journey has been going on now for more than 30 years, dedicating all summers in Ibiza and winters on all continents.